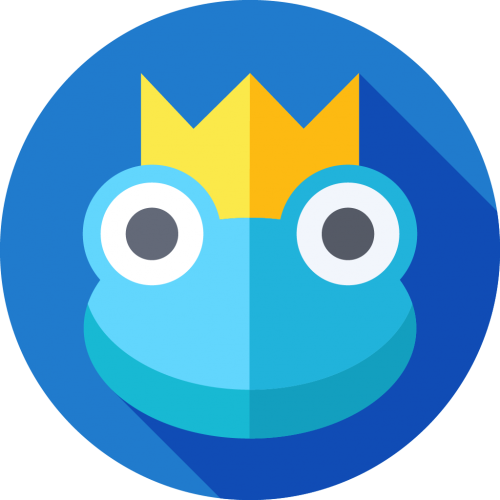 The King and Queen of the splendid Kingdom of Splendora are presiding over the birthday and engagement party of their daughter, Marina, to Prince Frederick of the beautiful Kingdom of Beautora. Also present are Marco, the magician, and life-long friend of Frederick, and Nardia and Gerda, cousins to Marina. Gerda is an innocent soul, but is easily led by her sister, Nardia, who is jealous of Marina and covets the throne for herself. Frederick’s birthday present to Marina is a special golden ball, created by Marco, which contains protective powers. During an entertainment of magic acts by Marco, Nardia steals his book of spells hoping to find one that will transfer Frederick’s attentions from Marina to her. Forcing Gerda to help her with a spell, she lies in wait for Frederick. But the spell goes disastrously wrong and the Prince is turned into a Frog. In the Palace garden, Marina and her friends are playing with the ball, but it is lost down the bottomless well. The Frog Prince appears and promises Marina he will retrieve it for her if, in return, he can be her constant companion. Not knowing who he really is, she readily agrees to his request in order to get her ball back. Down the well the Frog Prince goes until he reaches the underwater Kingdom of King Cockle. There he learns that the spell can only be broken if he is kissed by a Princess. Back in the Palace garden the ball is returned to Marina, who is so pleased to get it back that she forgets her promise to the Frog Prince. Meanwhile Nardia is again trying to use the book of tricks to fulfil her evil plans and, during an hilarious musical evening given by the Queen, she almost succeeds. It is only the intervention of the Frog Prince who saves the day and disposes of Nardia. Marina is so overwhelmed that she thanks him with a kiss and the spell is broken.